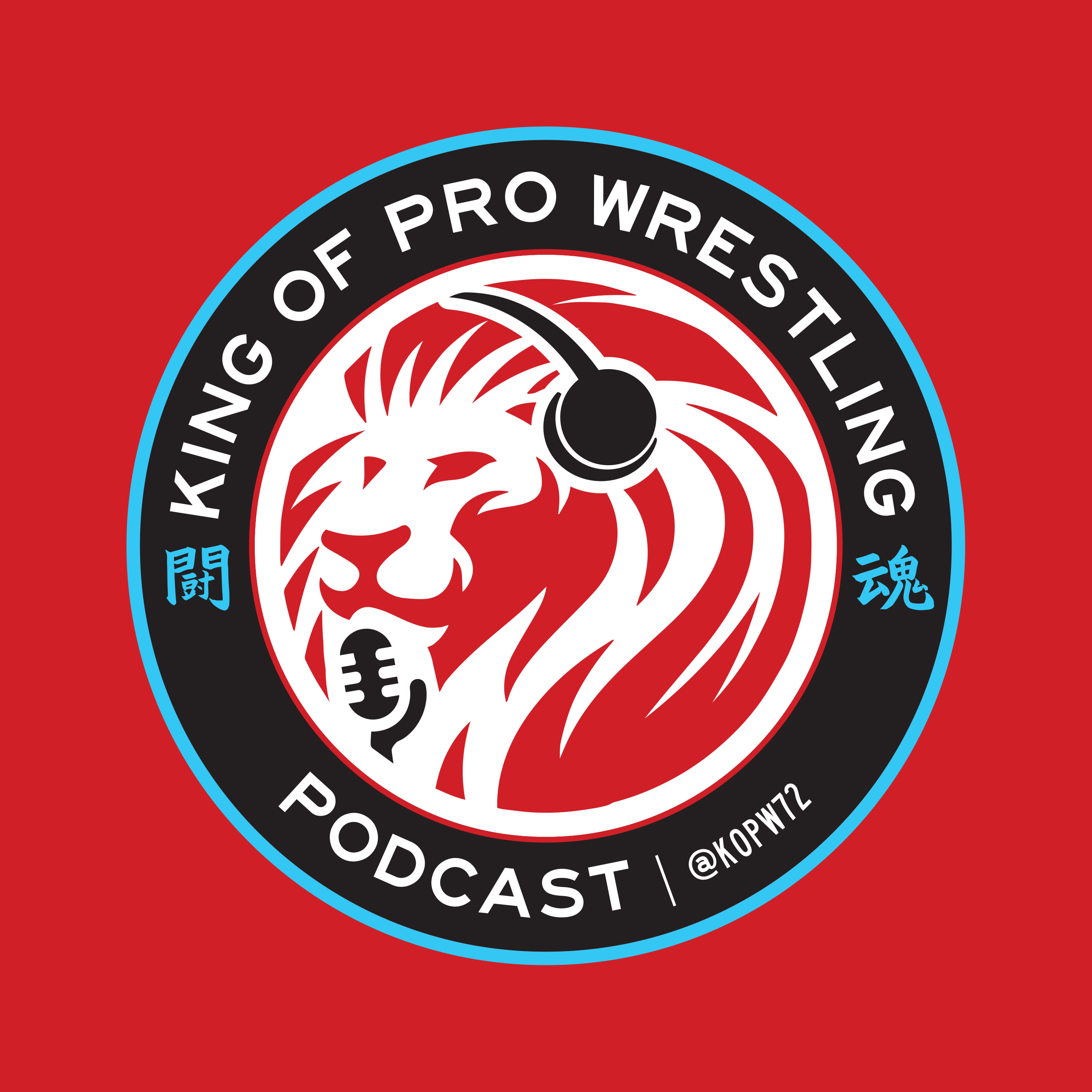 In this episode we pick up pretty much where we left off in Chapter I. Genichiro Tenryu is the new AJPW Triple Crown Champion, but his feud with Jumbo Tsuruta continues. How does it end and where do we go from there are the big questions we answer in this outing. The Four Pillars of Wrestling also make their first appearances in our story and we chart Mitsuharu Misawa’s life up until May of 1990. What elements of his upbringing drove him to wrestling greatness? What obstacles did he overcome? And who helped him along the way? All of these things and much more are covered in Chapter 2 of King’s Road: A 90s All Japan Retrospective. In addition to the context and background information discussed, we also take a look at the following four matches: * Tenryu vs Tsuruta 10/11/89 - Triple Crown III * Tenryu vs Tsuruta 4/19/90 - Final Outing * Tiger Mask II & Toshiaki Kawada vs Fuyuki & Yatsu 5/14/90 - The Mask Comes Off * Misawa, Kobashi, & Taue vs. Jumbo, Kabuki, & Fuchi 5/26/90 - New Generation Emerges Missing Pieces - Genichiro Tenryu left AJPW after his defeat in April of 1990 at the hands of Jumbo Tsuruta to be the spokesmodel for Megane Super - an eyeglass maker in Japan. However, the company seemed to have a dual motive in hiring Tenryu as they would launch a wrestling company shortly thereafter - Super World of Sports. The SWS was founded with the motto “Straight and Strong”. Megane threw a ton of money around to recruit wrestlers - mostly from All Japan - in an attempt to form a legitimate threat to the other big two - NJPW & AJPW. They even had a short-lived partnership with the WWF and promoted 3 shows at the Tokyo Dome with Vince McMahon’s company. SWS would not last and became a victim of both the economic downturn in Japan and perhaps their own overreach. Tenryu would go on to found another company - Wrestling and Romance, better known as WAR. Eventually he found his way back to All Japan and enjoyed quite a bit of success in his late 40s and early 50s capturing both the IWGP Heavyweight title and then the AJPW Triple Crown twice more. Horst Hoffman was a journeyman wrestler in the truest sense of the word. Born in Germany, he spent most of his early career wrestling in his homeland and honing his considerable technical skills. Hoffman caught the notice of fellow European Billy Robinson and found his way to the AWA for a time where he competed in upper mid-card and main event matches. Hoffman has been described as a shooter and his eventual exposure to a wider audience provided all the evidence one needed to apply that appellation. When he made his Japan debut in 1972 for International Wrestling Enterprises, it’s possible that an 11 year old Misawa first became acquainted with him, though he would go to even wider exposure in Japan when he began wrestling for AJPW in 1975. He competed at the highest level for the promotion notching victories over the Destroyer and Pat O’Connor and engaging in main event contests with Jumbo Tsuruta and Giant Baba. His final recorded All Japan tour came in 1977 when he teamed with Billy Robinson in the precursor to the Real World Tag League. They finished in the middle of the pack with 7 points. A minor figure in pro wrestling history by today’s standards, he was no less incredible in the ring and is highly esteemed by his peers and fans alike. If nothing else, he provided inspiration to a young Misawa when he needed it most and an older Misawa would pay a suitable tribute by adopting his ring colors and tights. 00:00:00 Introduction 00:10:00 Tenryu as champ 00:11:00 10/11/89 Tenryu v Tsuruta Triple Crown 00:17:00 Where next for Tenryu? 00:17:42 4/19/90 Tsuruta v Tenryu Triple Crown 00:24:00 Sayonara Tenryu 00:24:26 Where do we go from here? Tiger Mask 00:26:18 Mitsuharu Misawa 00:34:43 5/14/90 Tiger Mask II & Toshiaki Kawada vs Fuyuki & Yatsu - The Unmasking 00:36:21 What do I say? 00:36:54 5/26/90 Misawa, Kobashi, & Taue vs. Jumbo, Kabuki, & Fuchi - The New Generation Emerges 00:51:19 Next time on… & Endnotes Special thanks and shoutouts to Matt Charlton (@ShiningWizardDs), Hisame (@Hi5ame), Cary Silkin (@rohcary), and Filsinger Games (@filsingergames & filsingergames.com). Be sure to check out: ROLL UP - The Official Filsinger Games Podcast: https://filsingergames.com/rollup-podcast/ Uncharted Territory: https://podcasts.apple.com/us/podcast/uncharted-territory/id1537337233 & Last Stop Penn Station: https://laststoppennstation.com You can find me on Twitter @kopw72. I look forward to hearing your thoughts, comments, criticisms, advice, and everything in between. Thank you so much for listening and supporting this endeavor. Stay tuned for Chapter 3 - Gaijin & the Triple Crown coming soon!

I had the pleasure of speaking to Matt Charlton again for this episode. We chat about his new - and first - book, "J-Crowned: An Illustrated Guide to the Champions of Japanese Wrestling" - the genesis of the project, favorite bits of art, decisions on the flow of the book, favorite matches, and so much more. It's always a joy to chat with Matt and this was no exception. We spent a bit of time at the front of the interview talking about the current lockdowns and circumstances of the COVID-19 pandemic and while I feel it was a positive and interesting discussion, I know it might not be for everyone - that said, discussion about his book beings around the 19 minute mark. You can order your copy of "J-Crowned" in either electronic or print format at Amazon today! And don't forget to visit Matt on Twitter @shiningwizardds or instagram @shiningwizarddesigns for a commission or to check out his fantastic artwork. And be sure to check out Hybrid Shoot at @hybridshoot on Twitter or hybridshoot.com for more great titles coming soon! ...

Here it is: our special All In coverage! We kick off with thoughts recorded at Starrcast, less than 24 hours removed from attending the historic show live. We then move into our thoughts a week later after letting the show sink in a bit. We also tease our NJPW Destruction coverage for next week! And keep your eyes peeled as we'll be delivering special bonus content like interviews and NJPW discussion recorded live from Podcast Row at Starrcast in the coming weeks! Plus we'll have our special interview with Matt Charlton (@ShiningWizardDs) up soon as well! Make sure you hit subscribe, leave us that 5-star review you've been meaning to, & follow us @kopw72 on Twitter to come along for the exciting ride we're on as we endeavour to be THE New Japan Pro Wrestling podcast! ...

We are back to talk about the Destruction tour! Plus we've got some interesting news and notes, previews, and the much anticipated return of our Classic Match segment is announced with a match for next episode! All this and more! Special thanks to the Hails for our theme music. Huge shout out to Betsy Frymire for the incredible and much loved logo! And, of course, don't be shy, come find us on Twitter @kopw72, subcribe on iTunes and leave us that review. ...